U.S. Soldiers Rush to Get Tattoos Before Bans are Enacted

U.S. Soldiers Rush to Get Tattoos Before Bans are Enacted 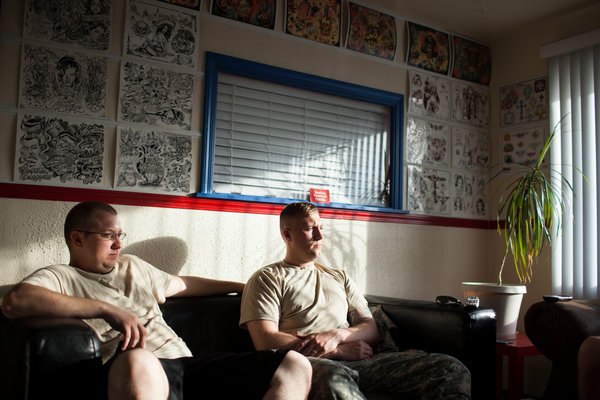 Recently we wrote about the Army’s regulations on tattoos. While tattoos are still allowed, they are now subjected to a list of specific restrictions. For instance, a tattoo may not be bigger than the soldier’s open hand.

Yesterday The New York Times came out with an interesting angle on the topic. The article covered the sudden surge of soldiers who have flocked to tattoo parlors before the regulations can affect them. While the bans were issued on March 30, there was also a 30-day grace period; if you got the artwork done before that period ended, then the new regulations won’t apply to you.

As such, local tattoo shops saw a sudden influx of military personnel. Some soldiers have walked in, plopped down money, and told the artist to “go for it.”

“They’re asserting an individualistic identity,” Anna Felicity Friedman theorized. Friedman writes the (very informative) tattoohistorian.com blog. “People who are in situations of depersonalization, whether it’s wearing uniforms, or other ways stripped of the ability to assert their identity, tend to react to this depersonalization by getting tattoos.”

While it has been a gold rush for tattoo shops that surround military bases, everyone knows that the moment is fleeting. What will happen to the shops now that the regulations have gone into effect? As reported in The Times, some shops estimate that 80 percent of their clientele comes from the military. But not all is lost. The regulations, while stringent, are not all-encompassing:

But at South Tacoma Tattoo, just a few blocks away, the tattoo artists said they thought there would be still plenty of skin left to decorate when things quieted down. The new rules do not say anything about chests and backs and other parts of the body always covered by a uniform, they said.